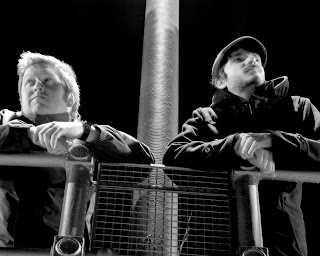 Chris has a magnificent ginger beard…which is a good job, as without it, he looks about 12 years old. I worry that his obsession with rare jazz, funk and soul is preventing him from embracing his inner thrash metaller.

Si has got a dodgy history of listening to heavy metal and is probably the fussiest eater I have ever known. He’s obsessed with Celtic and the New York Mets. He’s got a very good ear for accents and does a mean Sean Connery in particular. I am quite jealous of his fine collection of sneakers.

3. When did your initial music spark ignite?

Chris: Probably when my dad would play me Eurythmics, Billy Ocean and Jean Michel-Jarre records as a kid. I kept getting gradually more obsessive from there, really.

Si: There was always music playing in our house as I was growing up. My dad was a singer in a rock band in his younger years, but I was exposed to all kinds of stuff from classic rock to the Rolling Stones to The Police to Motown and Stax records. It was a really eclectic musical household to grow up in.

4. Who and what is your most important influence?

Chris: It’s a bit of an obvious answer but there are too many to list any single one, really… My most important influences are probably friends and DJs who will get me excited about new things that I’ve never heard before.

Si: Really difficult question. Hearing Goldie’s Inner City Life as a 15 yr old totally changed my outlook. I was a punk / metal mosher type kid before then, but that record just caught my attention and introduced me to a whole new world of music – drum n bass, then house and techno. Guys like Theo Parrish and Pepe Bradock continue to inspire me all the time as producers.

5. How did you hook up to found the “deep space orchestra”?

We have a very good mutual friend of ours called Phil Charnock to thank for Deep Space Orchestra coming together. We each knew him through seperate ways, and around 2005, he kept saying that we had to meet each other, and eventually this happened, and we found we had similar tastes in a lot of things. Lots of talk eventually led to a first studio session and we’ve never looked back since.

6. How did you distribute the roles? Are you both director and musicians at the same time?

Chris: Both of us play instruments – Si’s very good at the guitar, I’m ok on the keyboard but better at percussion. So I tend to program a lot of the beats and keys, but both of us are involved in pretty much every part of every tune – it’s a very democratic process! Si’s very good at suggesting things to change and generally keeping everything on track – I’m a bit of a scatterbrain and get distracted very easily – so to answer your question I guess he’s slightly more of a director, I’m slightly more of a musician, but it’s never really that simple. It works pretty well – we’ve been doing this for about 5 years now so can work pretty quickly.

7. How would you describe the style of “deep space orchestra”?

Si: That’s another difficult thing to answer! We mostly make house music, but elements of all of the different types of music that we are into creep into our sound – techno, disco, jazz, funk, soul, drum n bass, hip hop, reggae. If you listened to all the tracks we’ve made in the last 5 years, our music does tend towards the deeper end of the house spectrum but we don’t ever want to be pigeonholed as just deep house producers.

8. You already had a couple of releases on label like Winding Road, Delusions of Grandeur,… what are you currently working on?

Chris: We’ve been asked to do a lot of remixes recently, so we’re trying to get them finished & sent off. We’re also trying to work on some new original music for a few different labels (including our own), plus a few mixes for podcasts & radio shows, so it’s fairly busy at the moment! We can only hook up for one or two evenings each week, so we tend to work like mad when we get the opportunity.

9. What are your future plans?

Chris: Getting a live show together would be great but it’s hard to find the time to prepare it & do it justice right now. We’ll be doing a lot more DJ gigs this year too, which we’re looking forward to. Also, the studio badly needs a tidy and is starting to resemble the fallout from some kind of nuclear apocalypse.