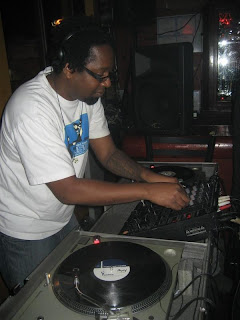 I am a dj/producer who rocks beats from acid to deep house.

2. You’ve been gracing the decks for over a decade now. Do you remember the first day behind the turntables? What did you feel?

I didn’t really understand the concept of pitch control or how to start the beat at the beginning of the phrase but yet I felt excited every time I got to play records. I do remember the first time I ever matched a beat, I was at my friend Gerald Moore’s house and it was two Dance Mania records; DJ Funk and DJ Deeon. Then I rode the pitch back and forth, and it stayed on beat. It was like driving a car and at that moment I found matching beats to be easy and then it went from there.

3. How has your personal style evolved over the years?

It has changed dramatically over time, I got into different music styles and started opening up my ears to all that was going on in music. When I first started djing I was playing mostly all Dance Mania and records from some Chicago locals, but slowly I got more interested in Cajual, Relief, and then finally some Deep House. In the late 90′s I started to buy a lot of imports from France and Germany. Really like all the Versatile, Sense, I:Cube, and Demon records.

For a while I stopped djing and collecting records even though I had bought an MPC-2000. I wasn’t feeling the mood to make music. Then in 2000 I graduated from college and played records everyday for 6 months. That got my dj chops up, and I started listening and trying to figure out my sound again. Later in 2003, I went to music school and studied classical and jazz composition and this is probably the most important time for my musical development, because I started writing better tracks after the training.

I always liked acid tracks, but I never had any machines to make it with, but I had a copy of Reason 1.0 and I totally understood how to use it, and all the different note timings and synths available, and I really dug how Reason was like using analog gear because you plug it together the same way. Now in my style there are the raw elements of Chicago ghetto tracks with the subtle drum pattern changes, the classical music arrangements, and the 7th, 9th, and 11th chord harmonies from Jazz.

4. Who and what were your most important musical influences back then?

I would say one of my main influences when I started making dance music was Paul Johnson. He was lacing up mad tracks that I was feeling. I also loved a lot of Dance Mania artist, being that I use to dance, I wanted to be that dj who rocked the party with some straight energy tracks. I also like Larry Heard, Cajmere, and Robert Armani as well. I was playing all that Chicago shit when I first started.

5. Who and what is it nowadays? What is it that inspires you?

Hmmm, my inspiration these days comes from my love of making music. I use creating tracks as a therapeutic exercise; I get out all my frustrations through materializing tones, sometimes I finish tracks and sometimes I don’t, but it is all for love though. This is probably my true inspiration, plus I enjoy the fact that I can contribute to society and human intellect in a way that is enjoyable for me and the end consumers.

6. You live and work in Chicago, a city with a rich musical heritage. Blues, Jazz, Soul and, of course, House music arose out of it. What do you think are some reasons for it?

I really don’t know the answer to this but just that Chicago has a musical vibe to it. All the different influences really made the city what it was and is, you had the European immigrants with their music, plus you had all the Blacks who move up from the south, and many Hispanic people moving in; all contributing to Chicago. Though there were many rough patches with race relations, eventually integration set in and all types of people were getting into the different types music.

Chicago, it is kind of in the blood, a mostly liberal midwestern city that was full of artists and lots of wealthy people who like music, so they would contribute to the scene through patronage. Also I think church in the Black community had a lot to do with it to as many of these Blues, Jazz, and Soul artist were learning there craft from being in Church bands and choirs, and it all just continued to grow. Also we must not forget about the huge drug influence in Chicago that was spurring the disco and house moments, those classic parties that everyone was talking about were filled with mad drugs so that also kept the music moving forward.

7. You started making music and producing your own releases in 2005. How would you locate yourself on a “Chicago Sound Map”?

For my releases: my sound is definitely closer to Techno side of things, but I guess that’s always been the sound I was into in retrospect, so I am basically making Techno at House tempos for the most part. But every once in a while I’ll make some deep house. Otherwise I make all kinds of stuff: Jazz and Downtempo Trip Hop.

8. What three words describe your music?

9. You also run two labels, Synapsis Recordings and Machining Dreams. What was, and still is, your motivation behind?

To put out good music and keep vinyl alive. I think that was always the motivating factor. I always wanted to release some vinyl pieces. I’m not hating on digital but I like to have a vinyl artifact in my hand, I like the way records feel as well.

10. What is the label’s musical concept?

Synapsis is a collaboration with Inbum Cho aka Avondale Music Society and we decided to drop a split vinyl piece back in 2008, so in the beginning it was just a vehicle for only Inbum and myself. Then later I heard some heat from Mauser and we decided to put it out. Now Synapsis will release the various styles of Chicago electronic music from Chicago artists.

Machining Dreams is more underground and it will feature artists from everywhere. The releases will most likely always be either Acid, Deep House, and or Techno.

11. What are you currently working on?

I am currently working on making enough tracks to do a mixtape for the summer. It will be all my tracks; 45 minute A and B side for the summer time. One side will be called AM and the other will be PM. So I’m in the process of writing tunes in these moments.

12. Plans for your musical future? Maybe a classical piano solo album? (We read in an interview with you at Hybridize blog, that you are gifted pianist and very into classical music)

Yeah, when I get more settled I want to buy a piano and write some Jazz-Classical fusions pieces. A bunch of short pieces that are fun, I’ll be using jazz harmonies and classical arrangements. These pieces will be all in sheet music form and then I’ll record it for a cd release and or digital download one day.

Otherwise, I have a few thing upcoming for the labels: Synapsis will see a solo release from Avondale Music Society called Mega Cycles EP(synapsis005), then a release from me called Examplars EP(synapsis006). For Machining Dreams there will be a various release called Vanguard Sound Vol. 1 featuring tracks from myself, G. Marcell, DJ Spider, Amir Alexander and Dakini9(mdreams004) and then a solo piece from Amir Alexander called North & Clybourn EP(mdreams005).