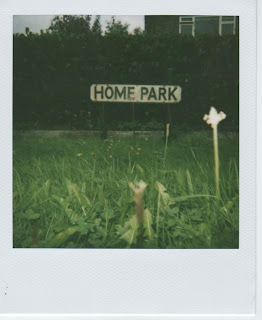 1. When did your initial music spark ignite?

Well it all started years ago when we used to have mixes after school at Sam’s house.

There’d be 4 or 5 of us all bringing round their new records battling to get on the decks for a bit, going back to back & just enjoying the music. But it was quite a while later that we got inspired to actually make music together & put records out under ‘HomePark’.

2. Who and what were your most important influences then, and who / what is it nowadays?

When we first started making music together we were really inspired by people like Pepe Bradock, Saint Germain, Kenny Dixon jr, Madlib, Rondenion.

More recently We have been especially feeling a lot of the UK producers like Cottam, Ethyl, Flori, BLM, Wbeeza & Huxley. They are putting out really great stuff at the moment. Some other producers we’re enjoying are… Iron Curtis, Sai, Baaz, Mount Kimbie, James Blake, Nicolas, Instra:mental, Hunee.

3. How would you describe your own style?

I guess it’s UK deep house, with a Detroit edge to it… But we don’t like to label things too much. Our fundamental aim is to make music that sounds fresh but also has that familiar feel to it, and also has to work in a club.

4. You played at “Enterbt Records Night” in Basel / Switzerland earlier this year. Was it your first gig out of London? What was the club night in comparison to a night out in London?

Yes we did a live show at the Satisfactory, it was our first gig abroad as HomePark and we really enjoyed the experience. We also got on really well with the Swiss djs Garcon, Morard,, Lasso, Timna Sommerfeldt and Demetrio Giannice who organised the whole thing.

5. How did you get in contact with Enterbt Records? Can we expect a Homepark release on this Swiss imprint?

Demetrio contacted us through myspace a while back, he was probably one of the first dj’s to play out any of our tracks & show us support, so it was great to meet him in Basel. The ‘What a day’ ep should be out on Enterbt really soon!

6. You already released an EP on bliq and 3rd Strike. What are you currently working on?

There are still some things waiting to be released and we are working on a couple of remixes. But in the meantime we’re concentrating on new material and getting it sounding just right. We don’t want to put out music just for the sake of it.

7. What are your future plans?

We enjoy doing the live show and DJing so hopefully more of that,a lso some more releases and eventually solo stuff, maybe even a label further down the line… But all in good time.